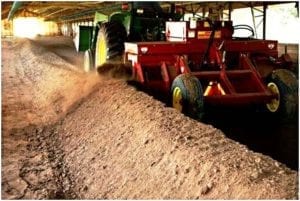 Windrowing allows the natural metabolism of bacteria present in the litter to cause a partial composting process that generates enough heat to destroy many pathogenic bacteria and microorganisms. Litter management between flocks is crucial to ensuring a healthy environment for chicks and will help to reduce potential health problems. Windrowing allows the litter to be pasteurized and recycled for multiple flocks.

It’s impossible to entirely sterilize a poultry house, but maintaining good litter moisture, ammonia levels, and pH levels will keep bacteria levels in check. Bacteria in litter can be either spore-forming (clostridium) or non-spore-forming (E.coli). Non-spore-forming levels increase with birds present and increasing levels of fecal matter. Spore-forming bacteria tend to increase with time as litter ages and the number of flocks increases. Spore-forming bacteria is hard to destroy because the spores can withstand harsh environments, but the rapid temperature change of windrow composting can catch the bacteria in a stage.

If you are considering using windrowing as a cleaning option, you should first consider the following factors:

To effectively use windrows:

If you have a heavy pathogen load, wash down the building before windrowing to incorporate as much dust as possible. It may take two consecutive windrowing events (flocks) to break some diseases.

Windrowing may prove to be time consuming, expensive if you need to purchase new equipment, and present a learning curve as you learn to maneuver the equipment, but in the end, it results in fewer pathogens and improved bird performance, flock after flock.

Subscribe below to receive our blog posts in your inbox!