When is a door not a door? 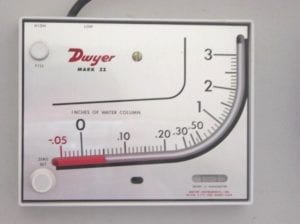 This old riddle gets new life when we pause to consider what the simple act of opening the door on your power-ventilated livestock barn can, and can’t, tell you about static pressure and barn tightness.

Consider the humble deep-pit hog building with ceiling inlets – if the farmer goes to open the door to the barn for afternoon chores and the door is hard to open, requiring a lot of force to break the seal before swinging free, he or she rightly thinks that the static pressure inside the barn is too high and goes in search of the culprit.  Maybe the inlets didn’t open fully – maybe extra fans have been manually turned on and forgotten – perhaps the contractor adding attic insulation yesterday blew it all over the soffit vents and blocked them.  Whatever the culprit, the farmer knows that the fans are working harder than they should be, reducing efficiency and lifespan, while increasing electricity costs and reducing the quality of the atmosphere for the pigs.

But what if the door opens normally?  Does that mean that there is no problem with static pressure?  That the fans are not being overworked or airflow reduced?

If the last step in the flow of air through the barn and to the fans is clogged – then the fans are working under too high of static pressure, even though it will not be felt anywhere else in the barn.  Pit fan transitions are the biggest culprit.  Normally undersized in the first place, they frequently become clogged with manure solids over time, further restricting their airflow. 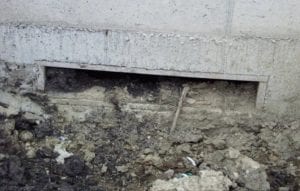 A typical 24” pit fan running at full speed under normal 0.05” WC pressure will move 6,000 CFM.  Shrink the throat of the pit transition to anything less than 8 ft2 and you risk increasing the operating pressure of the fan significantly.  The pit transition in the picture, previously clogged with debris, was probably forcing the fan to operate under 0.15” WC or higher, meaning an output of only 5,000 CFM – an almost 20% loss of airflow.  And because all the pressure is just between the pit transition and fan – the farmer will never notice it when opening the door…

So the takeaway here can be – Don’t be lulled into complacency when it comes to your ventilation equipment.  Just because everything “feels” right when walking into the barn doesn’t mean you aren’t missing something that could be improving the health of your pigs and saving you money.