Mites are small but mighty… mighty destructive. Of all of the pests pestering chickens, mites be the worst offenders. There are several varieties, which we will review below, and they all cause grief in both farmers and chickens alike. They’re hard to see and harder to get rid of, so prevention is the best medicine. Remember to practice strict biosecurity to protect your flocks from mites.

The Northern Fowl Mite (Ornithonyssus sylviarum) is a serious ectoparasite. It is common on wild birds and rodents who introduce it to commercial poultry unless strict biosecurity is followed. The Northern Fowl Mite is oval shaped and about 1mm in size. It is grey before feeding and then turns to a dark brown or black as it consumes blood. They do not survive long when off host, usually only a few days, though some could survive up to 3 weeks in ideal conditions.

The entire life-cycle of the parasite is spent on the chicken. It causes irritation on the bird as it feeds on blood. Eggs are laid en masse at the base of feather, most commonly in the vent area. Heavy infestations can remove as much as 6% of the bird’s blood volume per day.

Red Poultry Mites (Dermanyssus gallina) are similar to the Northern Fowl Mites, though they stay hidden in cracks and crevices of the poultry house during the day, only coming out at night to feed on the birds. Red Poultry Mites are about .7mm in size, making them hard to see. Red mites are grey before feeding and then turn a bright to dark red as they engorge themselves on blood.

They can only be detected at night when they are feeding, but could also be found by sliding a piece of paper between cracks and crevices. Streaks of blood will appear on the paper if mites are present. These mites are more difficult to eliminate because they can go long periods of time without feeding, often several months.

There are four stages of the mite life cycle: 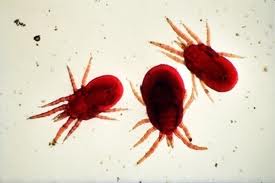 The complete life cycle from egg to egg-laying adult is only 5-7 days. This means that a mild infestation can quickly get out of hand. Adult females only lay 2-5 eggs, but the short life cycle means populations increase rapidly. A newly infested bird can support a mite population of more than 26,000 mites in 9-10 weeks.

Females lay eggs directly on the host and they hatch in 1-2 days. The larva then hatch and moult into nymphs in approximately 8 hours. The nymphs mature to adulthood in the next 4-7 days, feeding on blood from the birds. 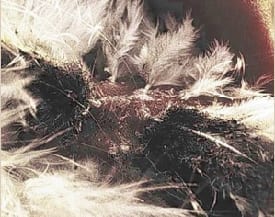 Mites are transmitted bird to bird by direct contact or by crawling from one bird to another. A house can become infested via people, contaminated pullet hauling trailers, the introduction of an infected flock, wild birds, and rodents.

Light to moderate infestations may go unnoticed as mites are nearly microscopic and crawl quickly across the bird’s skin. A heavy infestation is more noticeable as the mites produce a dark grey discoloration and matted feathers around the vent. This is the result of mites, mite eggs, their feces, and shed skins.

A sample of birds should be regularly tested to catch an infestation early. Roosters commonly get higher populations of mites than hens, so they should be checked at a higher ratio.

Sulfur dust is inexpensive and easy to apply but often done incorrectly or inadequately. It must come into contact with the bird’s skin to do the most good (when NFM infestations present).

Diatomaceous earth, or DE, is obtained from deposits of diatomite, the fossilized sedimentary layers of phytoplankton called diatoms. It kills insects by absorbing the oily or waxy cuticle layer. When this is lost, the insect loses water and dies.

Red Poultry Mites are harder to treat because they live primarily in the small cracks in the building. While treating the birds in the same manner is helpful, it doesn’t completely relieve the problem. Some producers have found that heat treatment to the barn after it’s been emptied and cleaned will kill the mites.

Treatments (in occupied barns) should be done two to three times, every five to seven days, because they are not known to be effective on mite eggs. By doing the treatments every few days, new mites are eliminated before reaching the egg laying adult stage.