Iron can be found in wells and municipal water all around the world. Sometimes it is obvious – the water runs red in the sink, often having a distinctive taste and smell. Sometimes it is less obvious – but still leaves its mark in the form of reddish-brown discoloration on appliances. While mostly harmless, it can create some problems when used in animal agriculture. 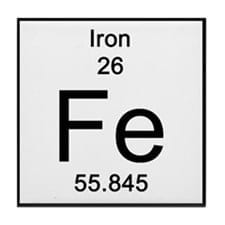 In poultry systems, particulate iron can clog nipple drinkers and cause leakage. Iron is a key ingredient in biofilm, a slimy substance that coats watering lines and harbors bacteria. This is a common problem in poultry watering lines because the water moves so slow there’s no turbulence to break up the biofilm.

Iron can be present in well water in three forms:

Dissolved iron in water that causes stained filters and plumbing fixtures is different from iron bacteria, and the two should not be confused. Iron bacteria do not cause disease but can be a major nuisance and challenge to poultry growers because they form a reddish-brown slime that coats the inside of pipes, affects pump action, and plugs drinkers. 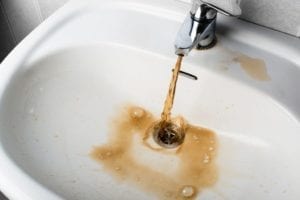 There are some methods for treating and removing iron from the well or drinking system. All of them work by causing iron to come out of solution and then filtering to remove the now-insoluble iron.  Iron in solution can be removed by oxidizing it from a ferrous state (in solution) to a ferric state (suspension) which can be filtered out.  Common methods include chlorination, ozonation, and aeration.

Adding chlorine is a regular occurrence in animal production to limit bacterial growth and has the added benefit of converting iron to a suspended state that can be filtered out.  Chlorine needs to be added to the system before the filter to be effective for removing iron, else all that occurs is bacteria (which may have some resistance to chlorine due to biofilm generation) now have an extra food source from the ferric iron particles, and the ferric iron can also directly clog watering system components.

Ozonating the water releases free radicals into the solution, helping limit bacterial growth and rapidly converting ferrous iron to a ferric state which then can be filtered out.  Downsides to ozone are the costs associated with the initial system purchase, ongoing maintenance costs, and some safety concerns for workers exposed to gases and downstream materials in contact with ozone, as ozone will eat away at many metals, rubber, and plastics.

Aeration does the same thing to iron in solution as chlorine or ozone, just a little more slowly. This approach mimics what happens when untreated dissolved iron comes into contact with the air after leaving a faucet.  Aeration methods can be of a two-tank or a single-tank variety. In a two-tank system, air is introduced into the first tank using a pump or other injection device. The dissolved iron precipitates in the first tank and is carried into the second tank where it is filtered.

Be sure to get your water tested periodically. Closely monitoring your water quality allows you to make adjustment to your water treatment programs and get the best results from your flocks or herds.