Air Speed – What you need to know 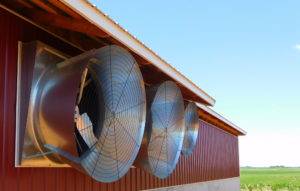 During extremely hot summer months, it’s crucial that we provide chickens with as comfortable an environment as possible to avoid heat stress. Humidity is often much higher during summer months, both inside and out, so we should provide cooler, drier air for birds to find relief.

Similar to dogs, chickens don’t have the mechanism to sweat. They do still lose their heat through moisture evaporation, primarily from their lungs in the form of panting. They also lose heat through their skin as air moves across it.

High air speed creates a “wind chill effect” and is critical to maintaining house conditions. The 400 feet per minute that used to be acceptable is usually too slow in today’s larger houses, making 600-700 feet per minute the new norm. Fans generate the air speed in tunnel houses, so it’s necessary to have one that not only moves air, but operates well at high static pressure and is energy efficient.  Make sure fans are ready for the season by changing belts, greasing bearings, and cleaning blades and shutters to maximize their performance.

Having uniform air speed is just as important as having enough. Air naturally takes the path of least resistance, so it moves faster down the center of the house than it does along the walls. If the air speed in the center is 600 feet per minute, and on the side walls is only 350 feet per minute, then only about one third on the house is feeling the benefits of the air movement. Similarly, when inlets & fans each run a quarter of the way down the length of the sidewall, only half the house receives the highest tunnel air speeds. 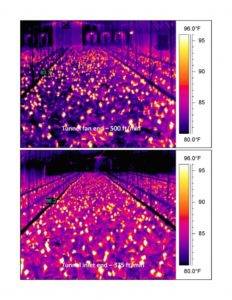 Smooth sided walls provide the best air movement. Curtains and exposed beams interrupt the air flow and result in a greater variation in air velocity. In fact, any obtrusion from the side wall can inhibit air flow – sidewall mounted furnaces included. House tightness also plays an important role.  Leaks near the fans will allow the air to short circuit the inlets, and take away from tunnel air flow.  The best way to improve air speed across the width of the house is to improve house tightness. By minimizing the length that the inlets and fans extend along the sidewall, and by sealing up the house with no leaks, you’ll maximize the length of the barn that gets the full air speed of tunnel ventilation.  That way, the majority of the birds in the house are experiencing the same amount of air cooling.

High humidity does make it more difficult for a bird to lose heat, and relative humidity is higher at night, however, outside temperatures are usually lower so you can increase heat loss in the birds by maintaining greater air movement. The air movement pulls the heat away from the birds to reduce their body temperature. As birds cool, their appetite increases. Digestion will produce more heat, requiring the fans to run longer. But, what you spend in electricity will be recuperated in better flock performance.

Birds must be able to dissipate approximately 12 BTUs of heat per hour per pound of body weight if they are to maintain their comfort level. If the air temperature is above what is comfortable, birds begin panting. As the temperature and relative humidity continue higher, panting becomes less effective to cool the bird, and it will succumb to heat stress and possible mortality. It’s important to note that supplemental cooling should be used in conjunction with air speed, whether it be cool cells, fogging, a sprinkler system, or a combination of these.

Want to receive our blog posts in your email? Subscribe below!