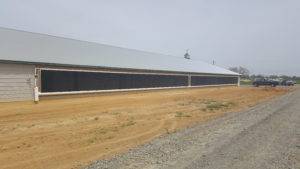 The hottest part of the year can create many challenges for growers, especially those with larger birds. Air speed is the first defense we have against heat stress, but after the outside air gets above the skin temperature of the birds (usually 95°F/35°C), it actually speeds up the discomfort of the bird, rather than alleviating it. In those times, it’s necessary to use another form of heat removal, the most common being evaporative cooling. This is usually accomplished by either cool cell pad system or by misting or fogging system (cool cells are most common, so that’s what we’ll focus on). As water changes phases from liquid to gas (evaporates), it removes substantial amounts of heat from the environment. The key to an effective evaporative cooling program is understanding the relationship between relative humidity (Rh), temperature, and animal physiology. After that, understanding how to get the most out of your evaporative cooling system doesn’t hurt, either.

So, first things first. For every 1 gallon (3.79 liters) of water that is evaporated into the barn, 8700Btus of sensible heat are taken out of the air and converted to latent heat, or humidity. Roughly speaking, that means that for every 2.5% increase in relative humidity from evaporative cooling, we can remove 1°F (0.5°C) from the air temperature. 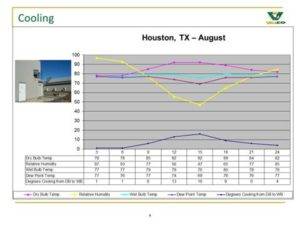 While it is true that where many barns are, it is hot and humid – it is rarely so at the same time. Usually, it is cooler and humid in the morning and evening, and hotter but drier in the midafternoon. And the crossing point is at 80°F. So, we have the 80-80 Rule – in most cases, if the air outside is 80°F (27°C) then the humidity is roughly 80%. This is because the ability of air to hold moisture (Rh) increases as the air warms up. So, in most cases (outside of summertime thunderstorms), when temperatures are above 80°F (27°C), you can safely run cool cells and still effectively evaporate moisture in the barn.

Some points to keep in mind:

Fans should remain running until the house temperature has dropped low enough that heat stress is no longer a threat.

The coolest, and dampest, air in the house is found right in front of the cool cells. As the air moves down the house, the temperature increases a few degrees, but the humidity drops by up to 20%, which will allow other moisture to evaporate into the air.

Learn more about poultry ventilation practices from the University of Georgia.

Want to get our blogs in your inbox? Subscribe below!