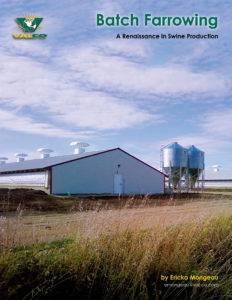 Commercial swine farming has had a long history, but it’s only more recently we see it beginning to repeat itself. When farming was more concerned with plant crops, farmers kept enough livestock to feed themselves and their neighbors. The pigs were raised with little direct management, left to forage for food, fed leftover scraps and by-products, and used to glean fields after harvest. They were an essential part of any farm, grown for pork and lard, and could be a ready source of income at the market.

Originally bred in large part for lard, pigs were much fattier before the 1950s. Slowly, as animal fats were given a bad reputation and the consumer became more health-conscious, pigs became more and more lean. The evolution of pig breeds and feeds meant that pigs could grow leaner faster than ever before. This also meant that the pigs didn’t have the physique necessary to weather the elements, and so, pig operations were moved inside where the temperatures could be stable and controlled.

As the fat content of pork decreased, the demand for “The Other White Meat” increased. Group or batch farrowing of pigs was designed around planting and harvesting seasons when there was less labor available for the hogs. Seasonal batch farrowing was used in the 60s and 70s, as pigs would be bred and farrowed during the spring and fall. During the 70s and 80s pork producers moved from farrowing two times per year to more intense year-round farrowing to make better use of facilities and labor. At the time, the industry practiced more All-In All-Out use of farrowing and nursery rooms with a greater focus on sanitation and pig health, but as labor became more intensive, batching fell by the way side.

There were several approaches to batching based on the number of rooms available and preferred weaning age. The simplest system had two groups of sows farrowed 12 weeks apart. A more intense system had three batches of sows farrowing eight weeks apart. Both systems used one farrowing room and one nursery. As systems became progressively more intense by breeding more batches of sows to farrow in a shorter amount of time at younger weaning ages, problems arose. Common concerns, such as when to add replacement gilts to a group, identifying returns to estrus, and fitting them into groups made batch farrowing more complicated. By the 90s there was a move to weekly farrowing (weekly farrowing could technically still be considered “batch” farrowing, but it doesn’t operate under strict scheduling of tasks) to make regular use of facility investments.

Today, there is a gradual shift back towards using a batch farrowing system, in part to prevent the spread of highly contagious diseases through a herd, but also because growers have found that batch farrowing leads to a greater number of piglets that are sold at more consistent weights. Done properly, there can be less mortality, less disease, less stress, and more profit.

Unfortunately, today’s pig farmers are largely uneducated in the practice of batch farrowing. It’s been practiced in Australia and Europe, but the American farmer is still hesitant to commit to the shift. We outline the advantages and disadvantages of batch farrowing below, as well as some practices and guidelines to help make the transition to batch farrowing a smooth one.