The Antibiotic Free Diet – How does it work? 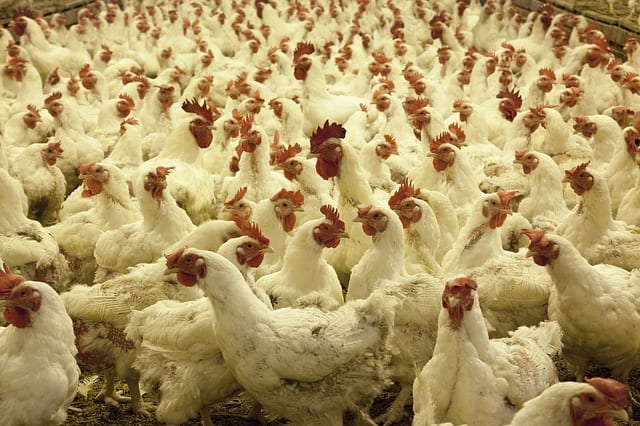 The antibiotic free diet is the most important factor in maintaining bird performance without the use of antibiotics. It is imperative that birds receive a high-quality, balanced diet. The use of poorly digestible ingredients runs the risk of poor bird performance and bacterial overgrowth with subsequent disease and intestinal disorders. Bacteria need protein to grow so reducing dietary protein and increasing digestibility reduces bacterial growth.

Grains and grain by-product provide protein and energy to the bird. Most bird feeds are made up of corn, wheat, and soybean meal, all of which contain non-starch polysaccharides (NSPs), such as cellulose, arabinoxylan, and beta-glucan. These NSPs are difficult to digest because they increase the gastro viscosity and reduce nutrient absorption. This causes a decrease in gut health, overall nutrition, and growth.

Poultry feed is primarily grains. The antibiotic free diet helps support the breakdown of the feed to limit bacterial growth.

Five to twenty-five percent of the total dry content in poultry feed is made up of NSPs. The largest culprit is arabinoxylan at a rate of about 50%. Enzymes degrade anti-nutritional factors, reducing the availability of substrate that bacteria used to grow. The most prevalent enzyme for this is xylanase. Xylanase is an enzyme feed additive that helps release the most encapsulated nutrients in the indigestible feed. It works in two ways: first by breaking down components of the cell wall to release the encapsulated nutrients, and second by reducing the digesta viscosity to increase its passage rate.

The antibiotic free diet requires a series of well-balanced, feed additive profiles ensure productivity along the entire gastrointestinal tract. Organic acids, botanicals (or essential oils) and minerals all play a key role in optimizing gut health. Organic acids have a greater effect in the upper digestive tract (stomach and small intestine). Botanicals have a greater effect in the lower digestive tract (the large intestine). Vitamins and minerals ensure that nutrients are broken down and absorbed properly along the entirety of the system. 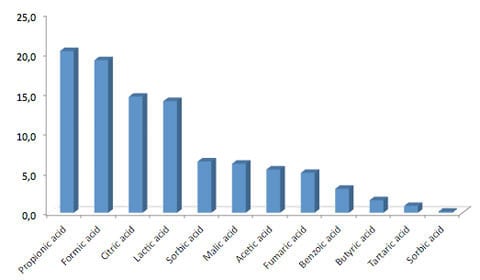 Organic acid use in an antibiotic free diet help to break down feed and eliminate bacterial growth.

Pathogenic bacteria are acid-intolerant. Adding dietary organic acids may halt or reverse microbial growth. The most common organic acids are formic and propionic, found in most feed additives. But citric acid and lactic acids can also be found. Blends seem to be more successful than using a single acid. Sometimes, organic acids are combined with salts of organic acids (such as ammonium formate or calcium propionate) because salts are less corrosive compared to the liquid variety and they are more soluble in water. However, salts do not lower gut pH as notably as liquid organic acids, which means they are not as effective in creating an environment suitable for killing bacteria.

Botanicals – such as cinnamon, oregano, and clove – have antimicrobial and antiviral properties and work best when used in conjunction with organic acids. As organic acids prevent uptake of bacteria in the upper intestine and limit the bacteria load overall, botanicals work to prevent bacteria uptake in the lower intestine. This creates a complete barrier against pathogenic bacteria along the entire digestive tract. In research done by Cargill, essential oils were found to be particular efficient in conditions where intestinal infections such as Salmonellosis and Coccidiosis were present.

The most common minerals found in feed additives are sodium and potassium, followed closely by copper and zinc. Sodium and potassium are involved in nutrient transfer across cell membranes, the regulation of body pH, and water balance. Copper and zinc are being evaluated as compounds to replace antibiotics in terms of growth promotion. Copper is added at high levels to promote growth; it aids in metabolism, immunity, and it protects tissue and muscles from oxidative stress. Zinc is needed for the proper function of many metabolic enzymes, therefore, it creates a more efficient digestive process, reduces the incidence of diarrhea, and improves weight gain.