What is black head disease? 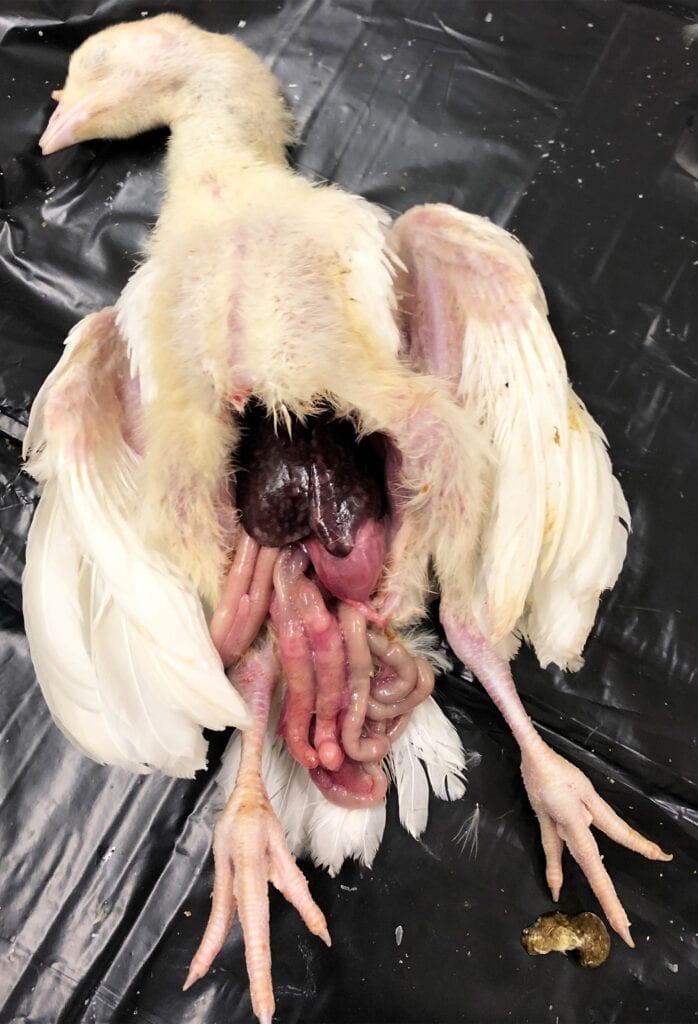 There are no longer any approved treatments available due to the increasing rate of resistance. Therefore, the only “treatment” is to limit the transmission. Black head disease is always fatal, but if it is caught early enough, and the birds are culled and removed promptly, losses can be minimal.

Histomoniasis is caused by a microscopic, single-celled protozoan parasite, Histomonas meleagridis. It causes inflammation of the ceca, followed by liver necrosis and finally death. Lesions are present in the ceca and liver upon necropsy. Early signs include:

The origin of the name “blackhead” is misleading as birds head’s do not actually turn black. Young birds have a more acute disease course and die within a few days after signs appear. Older birds may be sick for some time and become emaciated before death.

H. Meleagridis uses the egg of round worm Heterakis gallunarum as protection to survive outside an avian host. Worms take longer to develop (one month) than the parasite, which can kill a turkey in two weeks.

Infected poults transmit disease to flockmates through cloacal contact. The parasite can survive for a few hours after the bird passes – so removing sick and deceased birds as soon as possible is imperative in limiting the spread throughout a flock.

Prevention is difficult due to the microscopic nature of the parasite. Because healthy chickens and game birds often carry the cecal worm vector, any contact between turkeys and other galliformes should be avoided. A broiler breeder facility within a mile of a turkey house increases the possibility for infection. Broiler breeders are an ideal host because of their long production life and often heavy worm loads. Breeders shed eggs into the litter causing eggs to stick to objects such as shoes, farm equipment and darkling beetles, making any shared equipment a transmission agent.

If shavings are dumped outside a facility, there is an increased likelihood that eggs harboring H. meleagridis will be brought into the house when the shaving are oved inside.

To curb transmission, farmers should know the signs of an outbreak. Birds may have sulfur covered droppings and yellow vent feathers, both signs of liver failure. Any birds found with these symptoms can be culled and necropsied and the veterinarian notified. If infected birds are found early enough and can be partitioned from healthy birds, it may limit the spread through the flock, though it is important to note that partitioning may do more harm the good if done too late, because of the decreased room to move around in the partitions.