In January the first case of Highly Pathogenic Avian Influenza (HPAI) Eurasian H5 strain was detected in an American wigeon in South Carolina. Since then, there have been more confirmations in wild birds in North Carolina. Since February, there have been confirmed cases in other states too, including Virginia, Florida, Maryland, New Hampshire and more. In early February, the first confirmation of HPAI in a commercial operation was announced and there has subsequently been 20 more commercial operations affected in turkey, layer, pullet and broiler farms. The number of commercial birds affected so far has exceeded 7.4 million. States affected by HPAI to date include Indiana, Kentucky, Iowa, Missouri, South Dakota, Delaware, Maryland and Wisconsin. 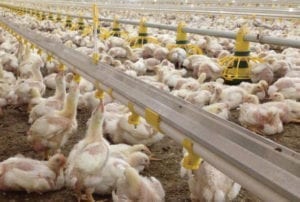 If you suspect HPAI in your barn, call your veterinarian immediately. AI can be spread through feces and respiratory secretions. It can also be spread through contaminated food and water, as well as on farm equipment or trucks and be spread farm to farm. People can also spread disease on their clothes and footwear, so good handwashing hygiene, foot baths and dedicated coveralls and footwear for wear inside the barn is important. Wild birds tend to be a leading cause of the spread of AI, as this is how it arrived in the USA. Wild birds tend to not get as sick as poultry, as poultry are more susceptible, and therefore can carry the viruses long distances along their migratory flyways. Direct exposure to wild birds is the most likely transmission factor. Therefore, it is crucial to limit exposure of poultry to wild birds such as waterfowl, with confinement rearing of poultry and strict biosecurity measures including cleaning and disinfection of barns and equipment as well as rodent and insect control. Vaccines may also be used to help control an outbreak, under the supervision of USDA-APHIS Veterinary Services.

It is imperative to have a thorough biosecurity plan not just in place but followed. This will help prevent the introduction and spread of infectious diseases including AI. After the 2014-2015 outbreak which saw 211 detections of HPAI on commercial operations, over 21 states, which resulted in 43 million layers/pullets and 7.4 million turkeys affected, new biosecurity guidance was developed in a collaboration between the industry, State, and Federal officials for producers to implement. There is a website dedicated to help growers write site specific biosecurity plans, as well as other useful biosecurity resources. https://poultrybiosecurity.org/. The 2014-2015 outbreak showed multiple methods of transmission including sharing equipment between farms, entry of wild birds into barns, and farm workers or visitors which all likely contributed to the spread of HPAI. There was also risk of spread from aerosol spread over short distances, carcass disposal techniques and other biosecurity breaches.

The economic impact of HPAI can be devastating for the poultry industry at an individual grower level through to national, even global, level. Growers may experience high mortality rates if their flocks are affected, and then must depopulate their barns if the virus is present. Once the affected barns have been depopulated, the carcasses need to be disposed of and the property and equipment needs thoroughly cleaned and disinfected, eliminating the virus. Once ready, the site must stay empty for at least 21 days, during which environmental samples will be collected and tested. After confirmation the site is virus-free, you may repopulate. During the 2014-2015 outbreak it took on average 111 days from National Veterinary Services Laboratories confirmation of HPAI on the premises to being granted for restocking. Therefore, on top of the loss of flock, there is also the cost of restocking and lost future production. The 2014-2015 outbreak resulted in approximately $1.6 billion in direct losses from poultry needing to be depopulated, but when accounting for the additional costs (restocking and future production) the impact to the US economy is thought to be closer to $3.3 billion. The below table, taken from the Final Report for the 2014-2015 Outbreak of Highly Pathogenic Avian Influenza (HPAI) in the United States, by the USDA shows the average percent losses of each type of flock inventory in the US.

If the industry is widely affected, HPAI may lead to job losses. Widespread HPAI may drive up costs of poultry products, affecting the consumer. During the 2014-2015 HPAI outbreak, consumers experienced wholesale egg prices reaching almost $2.80 per dozen, over double the previous average cost of large eggs. Meat prices may also be affected if HPAI infects broiler operations. Presence of HPAI also may restrict international trade of poultry products including live birds, eggs, and meat, as trade partners implement trade bans on poultry exports, further exacerbating the economic impact of HPAI. NAIS can work with trading partners to regionalize the US during an outbreak, allowing exports to continue from unaffected areas.