How to minimize sow stress, aggression in group housing 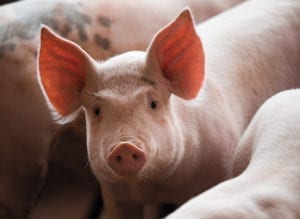 How to minimize sow stress, aggression in group housing

Automatic sow feeders, coupled with strategic waterer placement allows sows to have a clean, comfortable sleeping area, according to Joel Phelps, pork producer and president of Great Lakes Hogs. The combination of these variables has reduced stress thus minimizing aggression, Phelps told the audience at the New World of Technology for Pork Producers Symposium, sponsored by Maximum Ag Technologies, at the World Pork Expo in Des Moines, Iowa, USA.

Phelps said that if he was going to build all new locations this is exactly how he would do it, even if customers weren’t asking for group sow housing. After having converted several facilities, Phelps said that, if he was starting from scratch he would still use the system they developed as part of the facility remodels, but would install 100 percent slatted floors.

Sows do what they want, when they want

By using RFID clip ear tags with identification numbers on them, the hogs are identified by the gated electronic sow feeder as they walk in. While closed in, they are fed the amount dictated by the producer, allowing every hog to be fed to her needs. Employees of the operation carry around an iPad that they can log onto to change individual feeding plans at any time.

“I was worried they wouldn’t back out [of the feeder],” Phelps said, however, they must to get to water. Waterers are on the sides in the middle of the pens. Two per side, the water is available in a bowl.

Also, to keep the pigs from laying down inside the feeding stations there is a 6-inch bar across the bottom of it that would make it uncomfortable for the females to lay down in there for a significant amount of time. Hogs can also lift their heads to look outside of the feeders to keep them from feeling locked in. 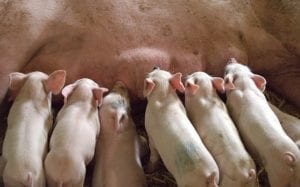 “I can walk in a farrowing barn, no one jumps up, they are just so used to people being around. There is less stress on the sows this way,” Phelps said.

Not all pen sizes are the same due to remodeling. They are square rather than rectangular. The number of hogs in a pen in based on its size. Each hog is given 22 square feet. Pens are organized so that each pen will farrow at approximately the same time and can then be moved in and out together.

There are lights above every feed station that are meant to offer an inviting atmosphere. Gilts are given training time after being moved from the gilt development units. Operational management has seen no negative results in combining the gilts with sows. However, they have made it proper procedure to add smaller females to the pen first before mixing in potentially bigger sows.

The feed system is accurate and customizable to a wide range of producers demands. It can feed operations of all sizes, monitor consumption per head or per pen area, and gather all the required information in real time so management can check it online 24/7.

Phelps went on to add that if the hogs are not eating, they’re sleeping peacefully.

“If you tell a sow that wants to eat at five in the morning to wait she’s not going to be happy, that’s where the aggression comes from,” he said. Speaking of the electronic sow feeders, he said, “It allows the sow to make her own decisions.”  Phelps said that the sows are typically eating between 2 a.m. and 5 a.m. each day, no matter what season.

To keep the females from getting protective over the feeding pens they make sure there is one feeding station per 12 hogs. One open pen equals what would have previously been one farrowing room or group of gilts set up to farrow at the same time. Females are moved to the open housing pens after being checked and confirmed pregnant in the gilt development units.

With the sows having more freedom to move around in the group housing plan rather than the stalls the hogs may have previously used, the gilts and new pen style takes up more space within the barn so the operation has made different areas to keep cull gilts and open females.