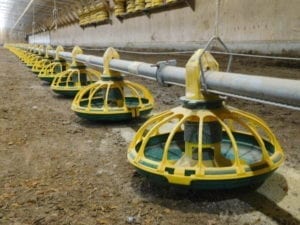 Until recently, Jay Goodman was a corporate man working for a major beverage company. As the desire for the corporate life waned, he found himself on the hunt for the perfect farm. He finally found it – with the help of his younger brother – on the Delmarva Peninsula.

“I came up from Georgia to visit my brother and see his farm, and while I was here I had an opportunity to get a larger farm, but it just didn’t feel right. My brother called me a few weeks later and says, “I have the perfect farm for you”, and it was this one. The gentlemen that had it wanted to sell, I drove up here to meet him, and we stood outside, in the freezing cold, and cut a deal. And 30 days later I was here. I took over for him mid-flock, on day 30, and grew those chickens out to market age.”

Jay has taken to the life of a poultry farmer pretty quickly, as evidenced by his regular top-ten status. What’s the key to his success? Careful management, the right equipment, and a willingness to do the extra work.

Some of Jay’s management tricks are inspired by his time with his former employer. The principle of “availability drives consumption” is equally applicable to poultry; the more that feed is available, the more birds will eat, especially if they don’t have to go find food. He uses the UltraStart Chick Feeder as a supplemental feeder and has seen tremendous success with young birds due to the availability of feed. He fills those feeders every two days at the beginning of a flock. Walks his birds every morning. Uses a sprinkler system to get birds up and moving during warmer weather. He’s also switched out all the drinkers on the farm to VAL-CO watering lines. “The biggest factor in ammonia control is moisture, and the biggest addition to moisture in the barn is the watering line. My floors were never this dry with any other kind of system.” 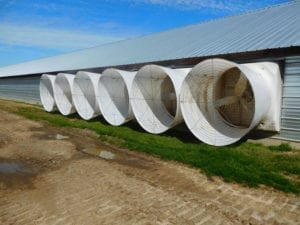 “I just do what the integrator asks me to do. I don’t run the birds hot. I don’t run them cold. I always have feed available and I keep the floors dry. And I have the best equipment to help me do that.” Jay has 4 houses on his farm – two of them are 25 years old, one is seven years old, and one has only had nine flocks through it. They all have different equipment in them, but the newest house – fully equipped with VAL-CO – outperforms every house he has.

“Every time I have needed something, the first call I make is to my dealer for a VAL-CO product because of the experience that I’ve had with the company and the performance that I’ve gotten from the equipment.”

No farm is without its issues. Jay recently experienced some auger problems on his VAL-CO feed lines, where the line was twisted and shaking, and he couldn’t find the source of the problem. He was going to try to get to the end of the flock but called his dealer with his concerns when the problem worsened. “Within 72 hours, tech support was here, and a salesman was here, and they got me going to the end of the flock. Now that I’m out of birds, tech support is back here fixing it, not just patching it, but replacing everything that is or could cause a problem. That’s a testament to who VAL-CO is as a company. I’m a small farm, with one house of VAL-CO product, and they’re here.”

Jay’s positivity and upbeat attitude are evident in the care he takes in his chickens. “When this little farm is at full production, in addition to the other two I own, we send about 20 million pounds of protein to market every year, and that feeds a lot of people. To be a part of that, and I’ve never been a part of that before, is just so different from anything I’ve ever done before. It’s a sustainable protein the helps people live better lives. It’s honorable, it matters, and it betters society.”

Signup for news and special offers!