Why does the world love chicken?

Why does the world love chicken? 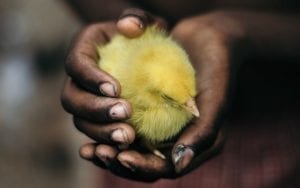 Every culture around the world has a signature dish that revolves around chicken. Its mild taste and uniform texture make it a blank canvas for flavors, seasonings, spices, and cooking methods to appease almost any palette. It might very well be the most versatile food on the planet, used in snacks, apps, and dips, sandwiches, salads and main dishes. Cooked with any seasoning, spice, marinade, breading, or rub; baked, broiled, seared, or slow-cooked.

But how did this simple meat become so popular?

As society evolved, so did the demands on processed chicken. And the industry was willing to adapt.

Until the 1960s, chickens were sold to consumers as whole processed carcasses, with or without giblets. During the ‘60s, cut-up fried chicken became popular – increasing demand for cut-up parts. Through the ‘70s, birds were sold whole, halved, quartered, or cut-up. Around this time more and more women began entering the job market, increasing the demand for food products that were relatively hassle-free to cook for dinner. Retailers began selling boneless, skinless cuts of chicken that could be prepared quickly, without the added work of cleaning and carving a whole bird.

In the 1980s doctors warned that eating too much saturated fat, found in red meat, could increase the risk of heart disease. Chicken, however, developed a reputation as a “clean meat”. Chicken is high in protein and vitamins, but low in calories, fat, and cholesterol, especially when skin is removed.

Chicken is an affordable source of protein because the bird, and indeed the industry, is so adept to growth. Through selective breeding and improved feed efficiencies chickens can be raised to market weight in less time than ever before. Improvements in feed science, technology, and housing design have all helped build the economical poultry industry we have today.

Show your chickens a little love today, and share your love of chicken with your loved ones.